Cleveland Lighthouse
🦠😷🦠😷🦠😷🦠😷🦠😷🦠😷🦠😷🦠 Due to the current health crisis- we have postponed all workshops and exhibitions at Scrumptious Reads. Please register your interest, so that we can contact you after the virus! 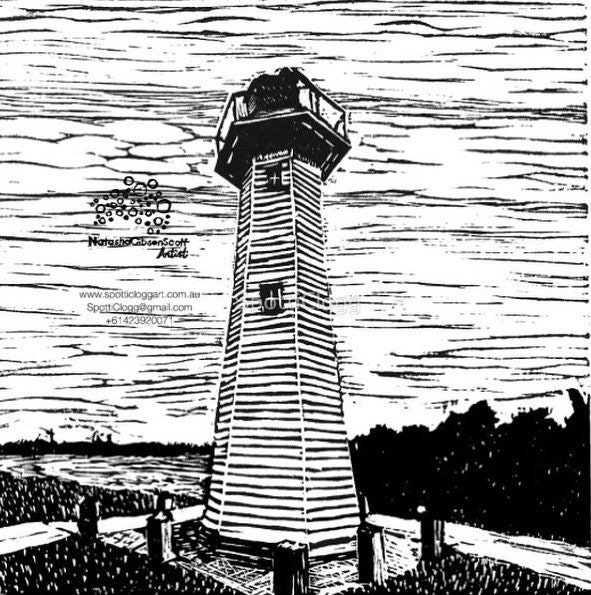 The Cleveland Point Lighthouse was the second light to be erected on this site, replacing an earlier beacon established in 1847.
This lighthouse was built in 1864 and though being the typical timber framed Queensland lighthouse is unusual because it is hexagonal rather than round and is clad with weather boards instead of the metal cladding common elsewhere in this state.
It was built to accommodate Cleveland, a once a thriving port in the middle of last century.
In 1872 the existing lens was replaced with the one from the Moreton Island light.
Two red sectors were installed in 1920 to indicate shoals off Peel Island, Cleveland Point, Banana Island and Raby Bay.
In 1934, the lighthouse was converted from kerosene to electric power. At this time the City Electric Light Company Limited became the responsible authority for the light.
The first local experiments in the use of laser beams as navigational aids were carried out from this lighthouse in 1969.
The light's second keeper, James Troy 1877-1927, holds the Australian record for being the longest serving lightkeeper at one lighthouse.
In 1976, the lighthouse was moved to a new location 30 metres to make way for a new beacon. Here it stood until renovated by the Redlands Shire Council in 1978.

The fine art reproduction is individually printed per order, and will be carefully packaged and shipped (unframed) in a postage tube.

The image size is 30cm x 30cm and fits perfectly into an IKEA Ribba frame.