Blue Lighthouse
The “Our Country” Fundraising collaboration between Nicole Darlington & Natasha Gibson Scott Has relocated to Red Hill. Open to the public from Tuesday 11/2/2020 at 92A Arthur Terrace! 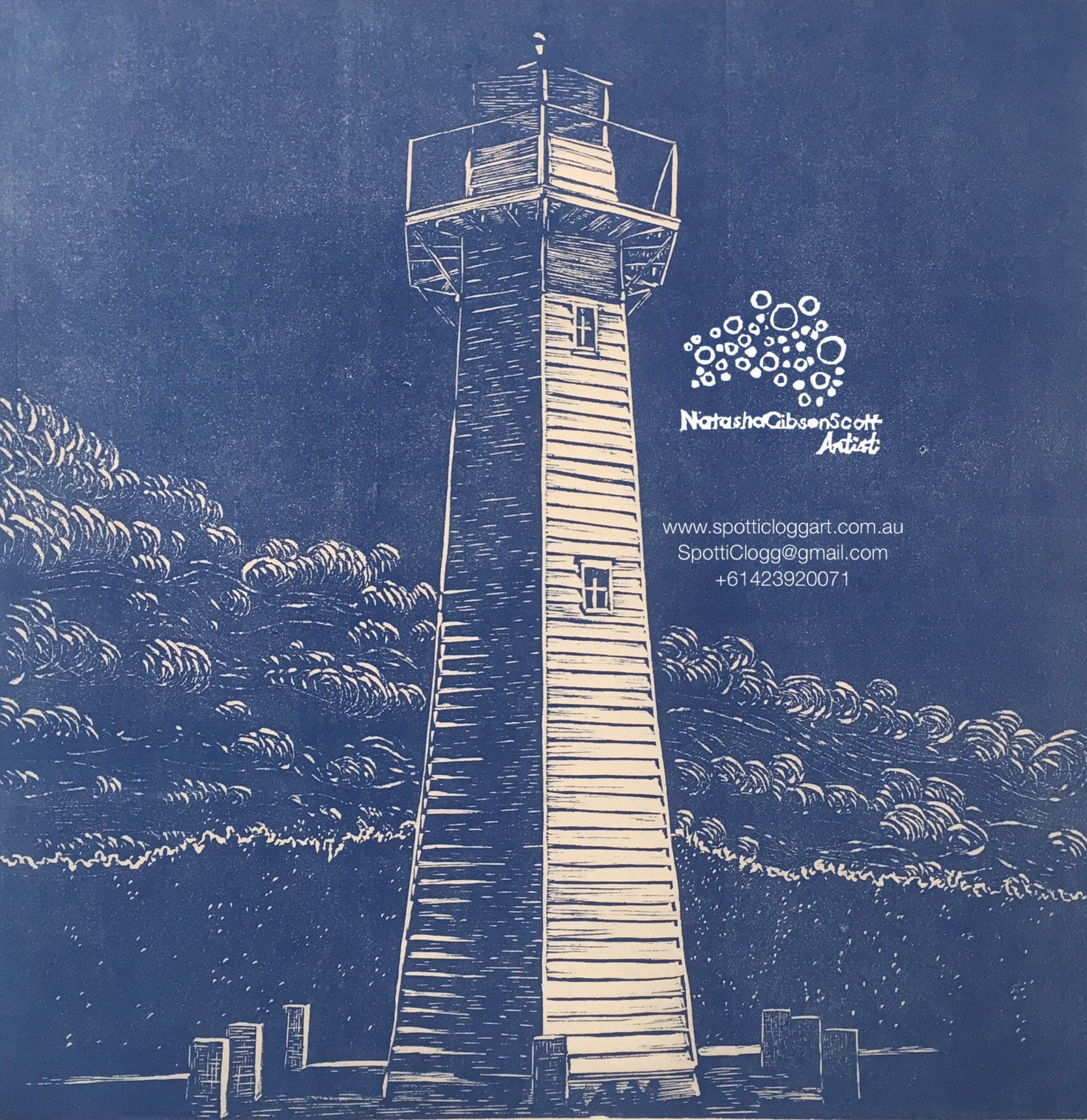 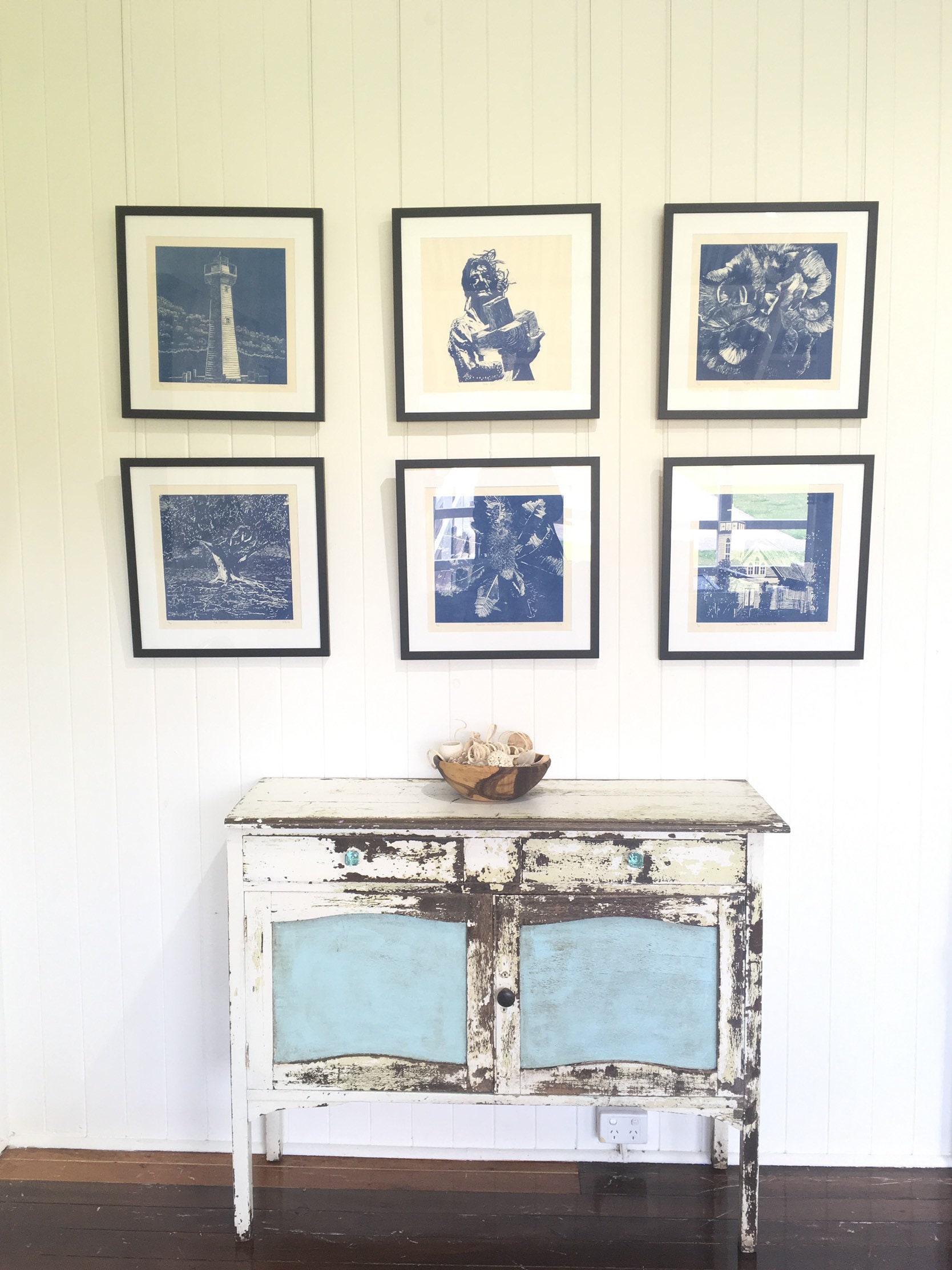 Lino cut print and line pencil drawing of The Cleveland Lighthouse. This is from a photograph I took‚ that I created a pen and ink illustration of and then a lino carving print.

This work is available for sale as an original lino cut print.

Sakura Oil based ink custom mixed to blue and matched to the artist proof as per recipe.

Fits into an Ikea Ribba frame

This is a limited edition original Linocut in an edition of 50. The pictured image is unframed and the edition number will be subsequent to 1/50.

The Cleveland Point Lighthouse was the second light to be erected on this site, replacing an earlier beacon established in 1847. This lighthouse was built in 1864 and though being the the typical timber framed Queensland lighthouse is unusual because it is hexagonal rather than round and is clad with weather boards instead of the metal cladding common elsewhere in this state.
It was built to accommodate Cleveland, a once a thriving port in the middle of last century. In 1872 the existing lens was replaced with the one from the Moreton Island light. Two red sectors were installed in 1920 to indicate shoals off Peel Island, Cleveland Point, Banana Island and Raby Bay. In 1934, the lighthouse was converted from kerosene to electric power. At this time the City Electric Light Company Limited became the responsible authority for the light. The first local experiments in the use of laser beams as navigational aids were carried out from this lighthouse in 1969. The light's second keeper, James Troy 1877-1927, holds the Australian record for being the longest serving lightkeeper at one lighthouse. In 1976, the lighthouse was moved to a new location 30 metres to make way for a new beacon. Here it stood until renovated by the Redlands Shire Council in 1978.

Origins of Linocut
Although linoleum is a floor covering that dates to the 1860s, the linocut printing technique was used first by the artists of Die Brücke in Germany between 1905 and 1913, where it had been similarly used for wallpaper printing.

A Linocut is a relief print (like a woodcut), the image is carved from a block of Linoleum. Areas are carved or cut away from the block, what remains will print when the inked roller is passed over the top of the block and paper is laid on the block to take an impression by hand or through a press.
All my Linocuts are hand printed on handmade Japanese Washi paper which for centuries has been used for block printmaking. It is thin enough for hand printing yet surprisingly strong and quite beautiful, also acid free and archival.
The majority of my Linocuts are custom coloured, I mix my own ink colours. I use Sakura Ink and have an artist’s proof print as my guide for the colours and tones that I will apply to a print in the same edition, there may be slight variations as my colour mixing is ‘painterly’ therefore each print in an edition is an individual.